I’ve been a bit quiet on the Missy front recently.  Sorry about that.  But with just a week to go, I’ve finished the jacket.  It needs a bit of a press, but I’m pleased with how it’s come out. 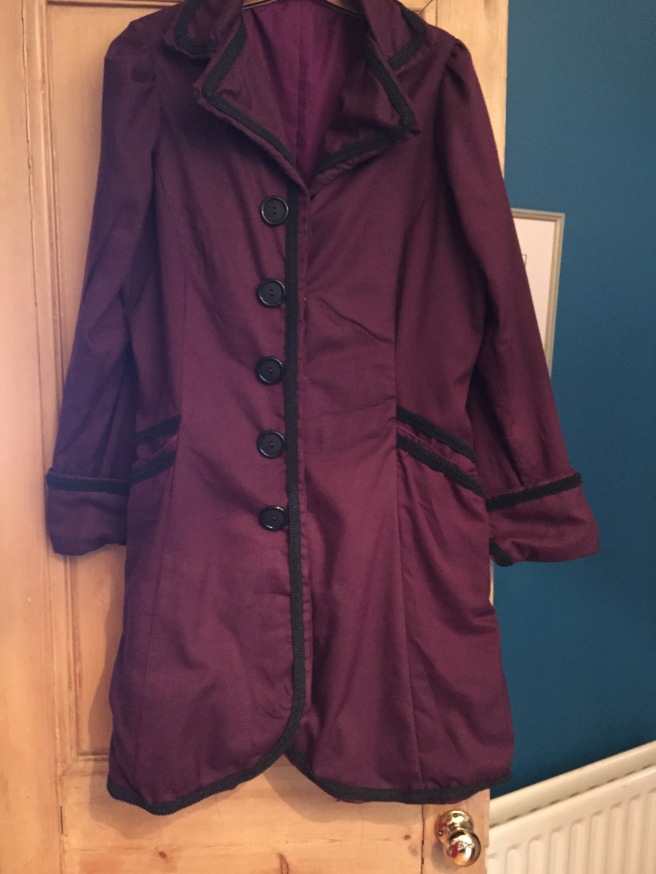 The new braid proved to be a dream to work with – much better than the other one.  I decided to sew the braid on the collar pieces, the front facing and the body of the coat before sewing them all together.  I secured the braid in all of the seam allowances to make sure it wouldn’t come loose.

It all went together well, though I did have to fudge the seam allowances a bit when I attached the lining to the coat at the neck edge, because of the modifications I made.  If I’d had more time, I would have topstitched the front edges to make them lie a bit flatter. 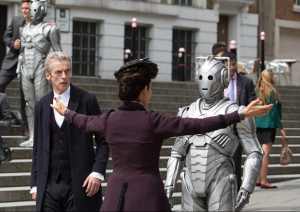 The original coat has a back vent, with the braid running up one side of it.  But my braid needs to be secured in a seam allowance, so I wasn’t going to be able to have braid on the outside of a back vent in the same way.  Instead, I created an overlapped back vent, and put the braid on the inner flap. 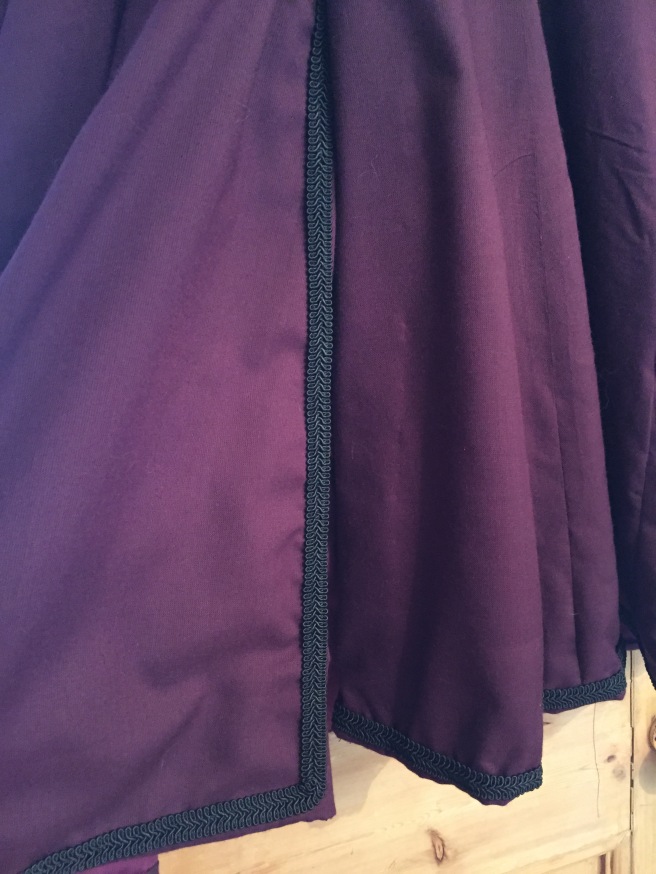 If I were making this again, I’d sew the braid further away from the bottom edge.  My hem allowance turned out to be pretty small, so i ended up making quite small turned hems. 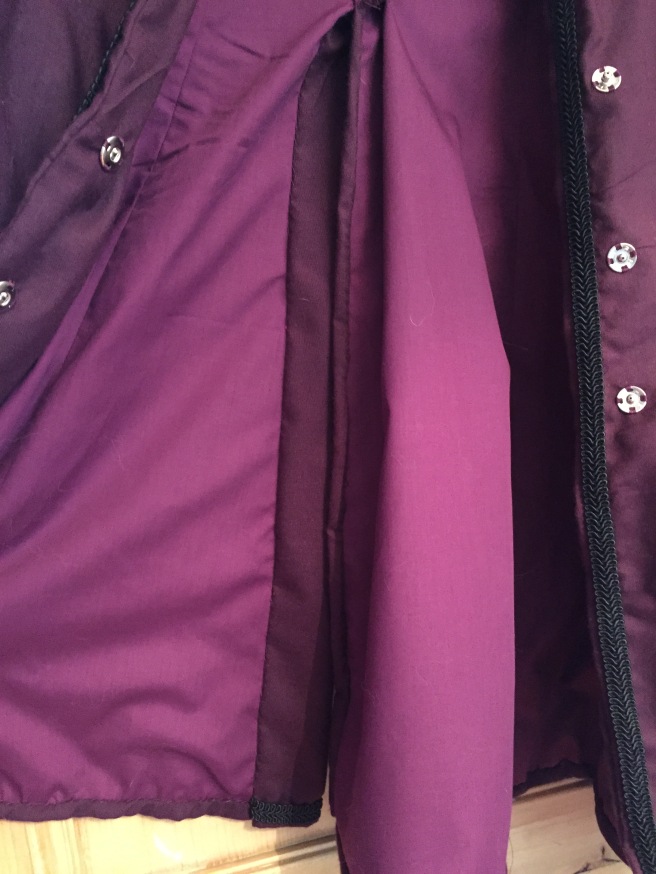 The buttons are sewn on the outside, but the coat was fastened with snap fasteners.  This is lazy, but also screen accurate: Missy’s costume is fastened the same way.  I attached those on the front of the coat before sewing the main fabric to the lining.  This was for neatness, as it keeps the untidy ends inside the garment without them showing.

The ones on the cuff are added in the same way.  The buttons are purely decorative, but I’ve added a small snap fastener in the point of each cuff, as I’d found the cuffs would otherwise fall down and turn themselves inside out.  I’ll see how that works out, but I might need to add some more snap fasteners down the outside edge of the cuff.

I’ve also sewn the pockets closed as the light fabric meant they were gaping open a bit while the jacket was being worn.  I can open them up if I want to at a later point.

I’ve discovered one thing I hate more than gimp braid.  Running out of gimp braid.

I’d bought a 10m card, thinking that would be plenty for the whole outfit.  And it probably would have been, if it hadn’t been for the section that unravelled and needed to be replaced, and there being a flaw in the final length that rendered it unusable.

No problem, I thought.  I’ll buy some more from the same supplier.  Except I went back to them to find they’d sold out.  Much cursing ensued, and I spent quite a bit of time trying to find a replacement that would be identical or close enough that I could get away with it. You would not believe how much variation there can be in a simple 15mm wide scroll gimp braid.

Given time pressures, and the challenges of unpicking the existing braid, which is now heavily secured into seam allowances to stop it fraying, I’d rather have a close match even if it’s not perfect.  I can always come back later and replace the other sections so it all matches.   But I’ll still have to rip out where I’d tacked the original braid onto the collar and the body of the coat – which took me several episodes worth of House of Cards – and tack on the new braid.  I want it to at least be consistent where I’m using it.  So I ordered two lots to try and get a close match.

Conscious of time, while I was waiting for it to arrive I also started making the skirt (which I’ll cover in a later post).

The one at the top is the original braid.  The others are the possible replacement options.

You’ll see neither has the internal channel of the first braid.  I think I marginally prefer Bachelor No 2 (the bottom braid), as it has a sheen and definition closer to the original.

I got an email two days ago saying that there are fifty days to go until the event I plan to wear my costume at.  Gulp.  Better pick up the pace.

My coat now has sleeves, which is a big piece of progress.

The sleeves themselves went into the jacket a treat.  I’d been slightly worried about them not fitting, given that they’re from a completely different pattern, but there was no problem at all.  I gathered the sleeve heads and they’ve gone in beautifully.

Next step, is the collar.  It’s going to require some quite complicated sequencing to work out in what order to add the braid and sew the pieces together.  More on that in the next post.

For the last couple of weekends I’ve been assembling the body of my Missy coat.  Here’s what it looks like right now.

It needs a bit of a press, but you get the idea.

The body has gone together well so far, but in working with the crepe fabric I’ve decided that it really would benefit from being lined.  So I’ve decided to line the body, but not the sleeves.

You’ll see I’ve also started to put the curve on the bottom hem of the jacket.  This was done with those old reliables, a dinner plate and a Sharpie.

I’ve not sewn the front facing to the lining yet, as I need to think through how the collar will work, particularly the order of construction with the braid.

I’ve added braid above and below the pocket openings, mirroring the direction it’s sewn on for each side of the jacket.

The braid I’m using is gimp braid.  I already hate it with a burning passion.

You can only sew it in one direction through the machine (with the point of the ‘v’ facing away from you) if you want to avoid it getting snarled up in the machine.  And it frays like nothing else.  I made the mistake of trimming it back close to the seam allowance after I’d sewn it on and sewn the side seams, only to find it unravelling on the right side.  I had to unpick the seams and insert a completely new piece of braid.

The fact that it needs anchoring within seams, and sewn across several times to secure is posing a few problems about how I attach the long stretches of braid along the bottom edge and fronts, and the collar.  That’s going to need lots of thought.

Meanwhile, I’m working on the sleeves.