I haven’t posted much in the way of a NaKniSweMo update recently, because there’s not been much to see.  Acres of stocking stitch is pretty boring and the light isn’t great for taking pictures at this time of year.

But this weekend I finally hit the colourwork yoke on my Epistrophy. 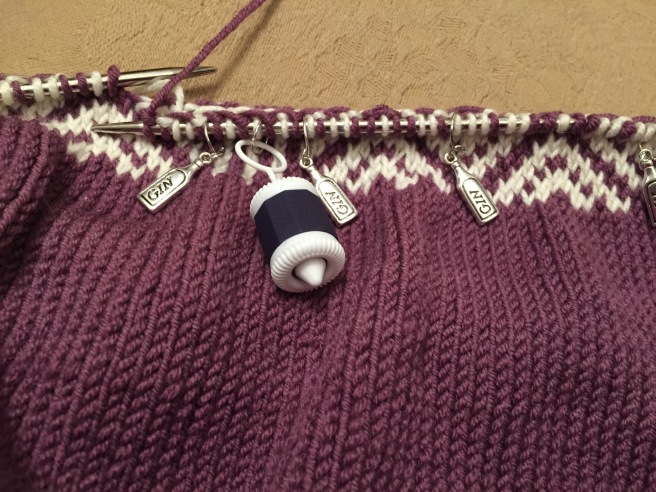 I’m using a plain white yarn as the contrast here, in exactly the same base.

The sharp eyed among you will notice that I’ve inverted the colourwork compared to the original.  This was entirely accidental – I only spotted it after about two rounds.  I put it down for about half an hour and went to put the washing out and do a few other jobs while I worked out what to do next.  I decided that I didn’t much fancy unpicking around 500 stitches of colourwork to do it again, and squinting at the chart I struggled to reverse the colours in my mind.  So mine will be different.  But it’s a geometric design, so it shouldn’t much matter, and I do like the way the white diamonds are working up in this version.  I’m nervous about running out of the purple yarn, so doing it this way will eke out the purple a bit longer too, as there are more white stitches this way.

Before I started the colourwork section I did pause a moment to think about colour dominance.  I habitually carry the contrast colour in my left hand (I do a mix of picking and throwing when I’m knitting colourwork, as I’ve found it’s most comfortable to work with a colour in each hand).  That makes the contrast colour the stronger of the two.  I wondered about switching it to make the white recede a bit more into the background, but I think I like the strong white diamonds in this version.

I’m a bit anxious about how this yarn will steek.  It’s very smooth and not at all sticky.  If I don’t get the steek reinforcement right I could well end up with a handful of string to show for a month’s knitting effort.  I think this is one where I’ll definitely have to tape the raw edge rather than just rely on the crochet reinforcement.

I thought I’d provide a quick update for those of you interested in how I’m getting on with my NaKniSweMo project.  I’m on target.  Woohoo!

With 30 days of knitting time, and 10 balls of main colour yarn to get through, I’ve set a rough timetable out for myself.  I’m aiming to finish a ball of yarn at least every three days.  After seven days I was well ahead of that, having used 3 1/2 balls of yarn, even though I had a couple of nights off knitting because I was out with friends. My aim was also to finish the body, up to the armholes, in that first week, which I also met (I’m allowing a week for that, just less than a week for each sleeve, about a week for the yoke and the remaining time for the finishing, including the steeking and front bands).

No pictures I’m afraid, as the light’s not great at this time of year.  But there’s not much to see anyway – just a tube of plain, purple knitting.

It’s come up a bit smaller than I was expecting, but I know (from another project) that this yarn grows dramatically when washed.  I’m counting on that, otherwise it might be a wee bit tight on me.

And, I’m already panicking about potentially running out of yarn.  I’m sure it will be fine, and I’ll be in a better place to judge once I’ve finished the first sleeve, which needs to take no more than two balls of yarn if I’m to have enough left for the yoke and finishing.  But I may start stalking stashes on Ravelry in case anyone has any spare in this shade.

For some intrepid people, November is the month when they take part in NaNoWriMo.  Not me.  (Though one year I might give it a go.)

I’ve done it in several previous years, making my Petals In Ice, an O w l s and a Braid Hills.  (Though I didn’t try to formally enter the O w l s as it’s nowhere near the 50k stitch count.)  The observant amongst you will have noticed that three of those patterns are written by the wonderful Kate Davies, who is one of my favourite designers.  She creates some wonderfully wearable designs, that are steeped in textile history and her native Scotland.

This year’s NaKniSweMo will be another of her gorgeous patterns. 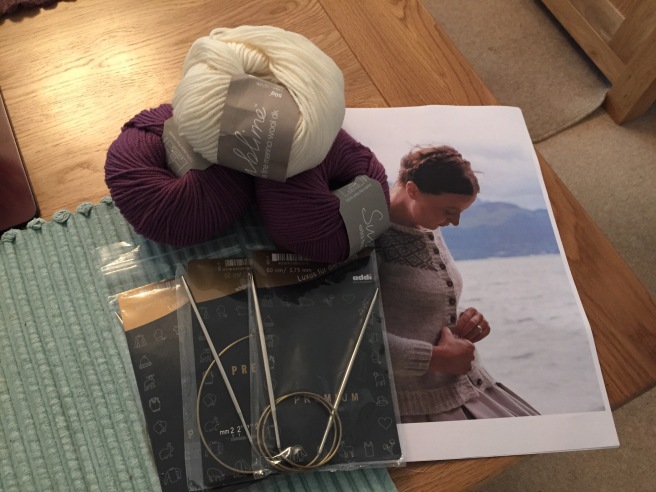 Epistrophy is a fitted cardigan with a colourwork yoke.  It’s knitted in the round and steeked, in the traditional manner.  For those of you who don’t know, steeking involves cutting your knitting (after reinforcing the area you’re intending to cut, of course).  It enables you to knit colourwork designs such as fair isle in the round.  This is normally easier, as it means you can work colourwork on knit rounds, rather than having to do it while purling back across a flat row.  But colourwork and steeking is going to be quite a challenge to complete in just a single month.

The yarn I’m using is Sublime Extra Fine Merino Wool DK.  The main colour will be the purple shown in the picture, with the colourwork yoke in white.  Ravelry tells me that I bought the purple yarn over five years ago in Abakhan during a weekend away on Chester.  So it’s about time I got round to using it!

After day 1, I’ve finished the rib on the body, and I’ve started the stocking stitch section.  I’ve nearly finished the first 50g ball of yarn, so I’m well ahead of schedule.  I’ll post a few updates on progress as I go.