I thought I’d set down how I went about pulling together the Nyssa costume, in case anyone is interested.

For research, I watched The Keeper Of Traken, the Doctor Who serial where Nyssa first appears, and used stills found via Google Image searches to try and get the details right. 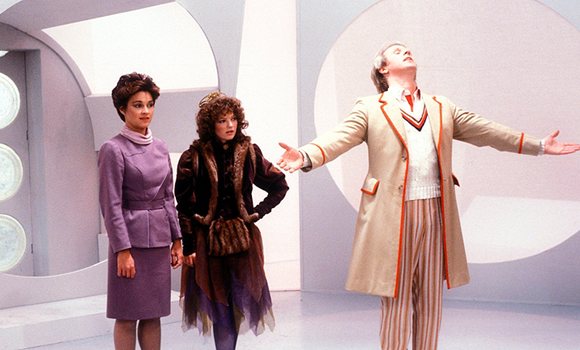 This is the key part of the costume.  It was the most time-consuming to make, and is probably the most complex thing I’ve ever made. The original is in a sort of patchwork velvet in dark red/russet colours.  That is very difficult to replicate, so I ended up opting for a plain crimson velvet instead.  It has leg of mutton sleeves and a high collar. It’s fastened with four buttons, and button loops.  The hem is straight.

I used the jacket from Simplicity pattern 2207 as the base for mine.  It’s a princess-seamed jacket, which gives the right shape through the body.

But I had to do some significant modifications to it. To make sure I’d got these right and understood the jacket construction I made a full toile/muslin before cutting into the super-expensive velvet.

By far the most difficult modification was the sleeves. 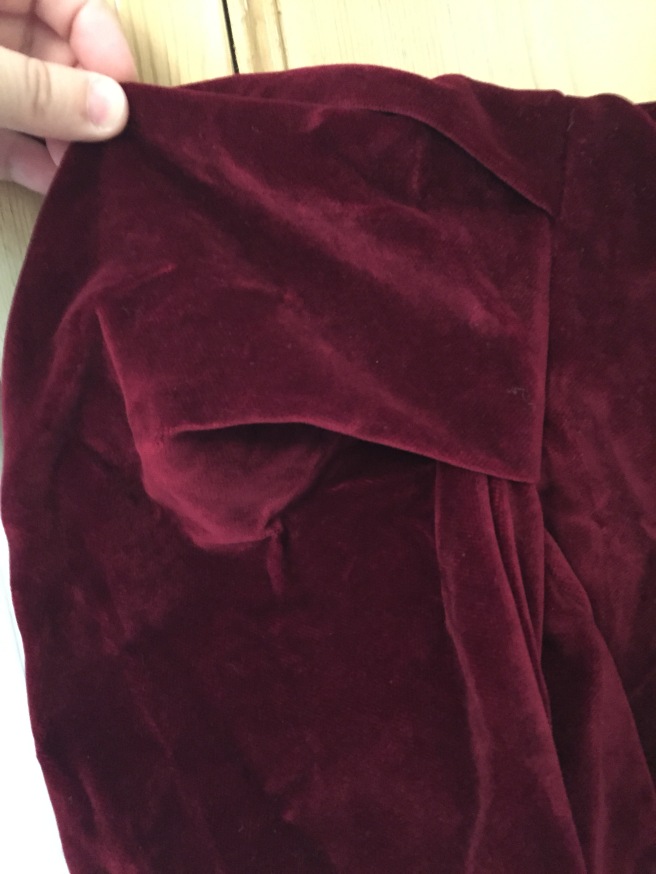 I did this by making up the sleeve in calico.  The pattern was in two parts (an upper sleeve and an under sleeve), so it was impossible to do the modifications without making it up in that way.  I then cut across the sleeve head horizontally and inserted another piece of calico to add extra fullness and length (about an extra 10cm in length across the full width of the sleeve).  I pleated the excess into the sleeve opening, using the same technique as on my Rowena.  When I was happy with the look I undid the seams on the sleeve and cut the inserted calico on a straight line between the two pattern pieces.   This piece of calico became my pattern piece for the sleeves, with seam allowances tidied up. 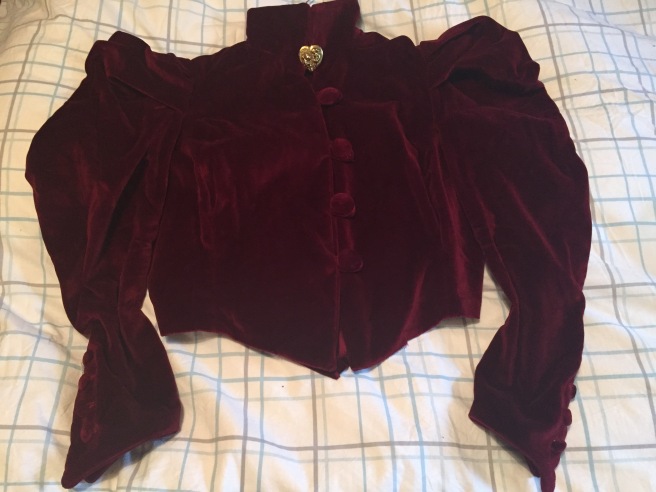 I toyed with straightening the hem, but decided that the shaped hem was more flattering.  If I did straighten it, I would have liked to have added a bit more length in the side seams.

This was a very simple and quick part of the costume (about 2 hours from start to finish). 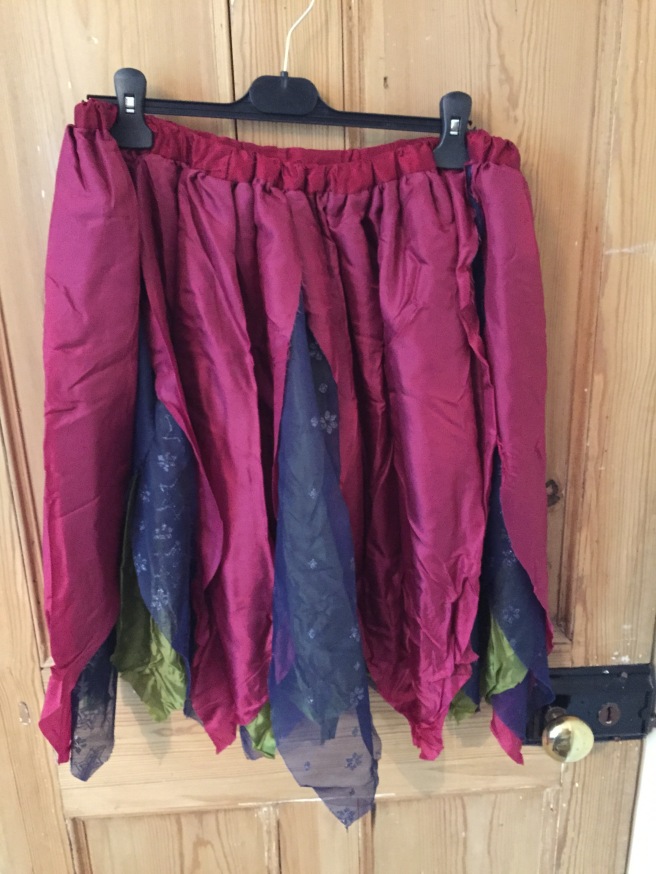 I cut a series of leaf shapes out of three different fabrics, using another bit of calico as a pattern piece.  The green and pink are both polyester lining fabrics.  The blue is a voile with a printed sparkly gold design on it.  I had it in my fabric stash already, and it provides a bit of variety in the skirt.

I layered the leaf shapes over each other.  The green provides the base, then the blue, then the pink on top.  I then gathered them into a very simple waistband which acts as the channel for some 1″ elastic.  It’s not the most elegant of skirts, but the waistband is covered by the jacket and it gives the right effect.

I left the edges of the leaves raw.  I might go back and do some simple rolled hems, but it will be a lot of work for something that is only going to get occasional wear.  I also experimented with putting some net under it for shape and structure, but found it left the skirt too bulky when the original has quite a draped look.

There are a few other key pieces for the Nyssa look. 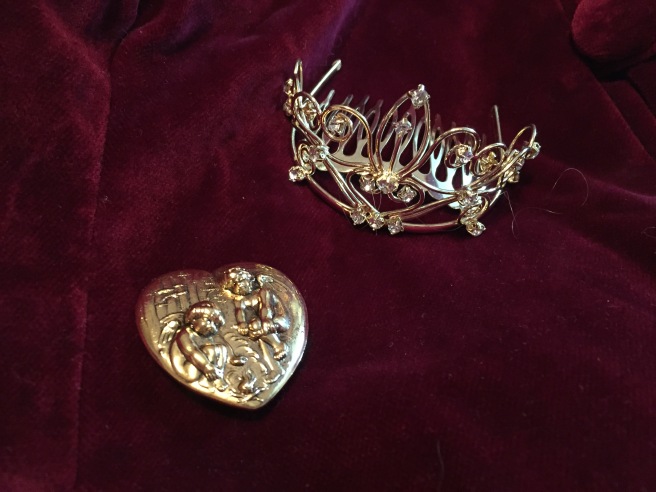 The brooch Nyssa wears at her throat is very hard to see from stills and I struggled to find a good close up of it.  So I had to aim for something that was broadly the right size, shape and texture.  I made this one from a button I had in my button box that I’d got from a mixed lot of vintage buttons.  I simply glued a brooch back onto the back of it using jewellery glue.

The tiara is a child’s tiara for a wedding or confirmation.  It’s on a comb, which makes it secure an easy to position.  I found it on eBay. 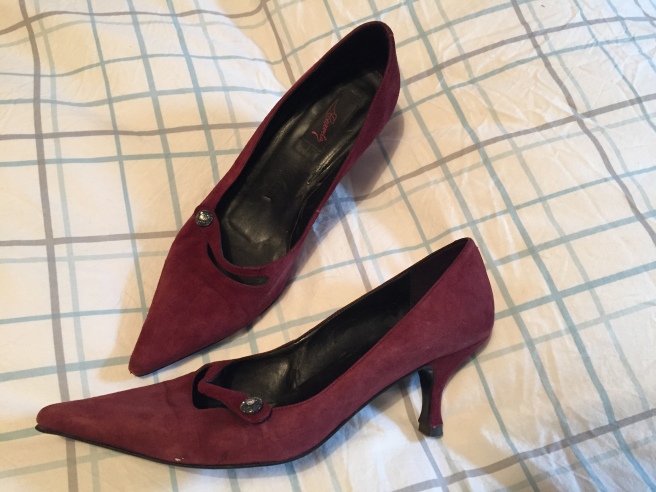 Nyssa’s shoes are, again, not really shown on screen.  From the way she moves and the sound, I get the sense they were low-heeled pumps of some sort.  And the colour clearly matches the rest of her outfit.  I’ve had these suede, kitten-heeled courts for a long time, so I thought they’d be perfect.

The tights are a pair of Jonathan Aston opaques in a gorgeous, bright blue, which turned out to be a perfect TARDIS blue.  I found them in the sale in John Lewis.

Hair and make up were very straight forward.  I scrunch dried my hair with a bit more of the creme I use than normal (Aussie Frizz Remedy) and parted it in the centre rather than to one side.  Make up was heavy on the pinks.

Yes, I know, I appear to not be wearing the shoes by this point …

I took part in cosplay for the first time last summer at LonCon3.  I dressed up as Nyssa, a companion of the 4th and 5th Doctors.

I decided to do it because a friend of mine was telling me how much fun she’s had in the past cosplaying at events.  It seemed like a great way of hurling myself into the whole con experience. I’d been at other events where people had been cosplaying and I’d been in awe of the amazingly creative outfits they’d pulled together, whether it was the woman whose Wonder Woman outfit was completely handknitted, or the man I saw who dressed as a Sharknado.

I picked Nyssa for a few reasons:

The idea came to me because a friend of mine saw a photo of me from a friend’s wedding a couple of years ago and suggested there was a resemblance.

So I pulled a costume together for the main cosplay day of the convention.  And apart from some strange looks from the hotel staff at breakfast that morning, I had an absolute ball.  I kind of got a bit of a window into what it might be like to be Kate Middleton – people shout your name at you (well, your character’s name …), they want their photo taken with you, they give you things (hall costume awards), and I got to wear a tiara!

It’s an amazing ice-breaker and way of connecting with people.  I met someone in the vendor’s hall who normally cosplays as the 5th Doctor and was suddenly regretting not having brought their costume this time.  I was photographed next to one of the two TARDISes at the Convention by a man from San Francisco who wanted to put me in his Who fanzine.  I even got Instagrammed by a gushing Hugo Award-winner.  Apparently Nyssa had always been Mary Robinette Kowal‘s favourite companion, and was a huge role model when she was growing up.

It’s also an incredibly playful thing to do.  I’m a big fan of play.  I have a busy job, and being able to let my hair down and engage in playful and creative activities is one of my favourite ways of relaxing, whether it’s making stuff, or being deeply silly with my friends.  As a child I used to be part of a local drama group, and I also did Drama at GCSE,.  Both of those were a great creative outlet, but I probably haven’t acted since I was a teenager.  Cosplay is a great way of having the fun of pretending to be someone else and performing a role, but without the stress of learning lines or being quite so obviously in the spotlight.

It’s something I definitely want to do again, so I’m just about to start work on a new costume to wear at an event later this year.  I plan to write a series of blogs about the costume-making process.  In the meantime, I’ll write one about how I pulled the Nyssa costume together, in case it’s of interest.