With the jacket and skirt done, there are a few finishing touches needed for Missy.

I ran out of time to make a blouse.  I’m not too upset about that because I’m still not happy that I’ve found the right pattern.  It needs a dropped yoke cut on the bias with the body of the blouse gathered into it, quite full sleeves and a Peter Pan collar.  So I’ll put the fabric that I bought by until I can find the right pattern. I’m sure Missy will come out to play again, so it can wait.

In the meantime, I found this shirt on eBay, which I thought was close enough for now. 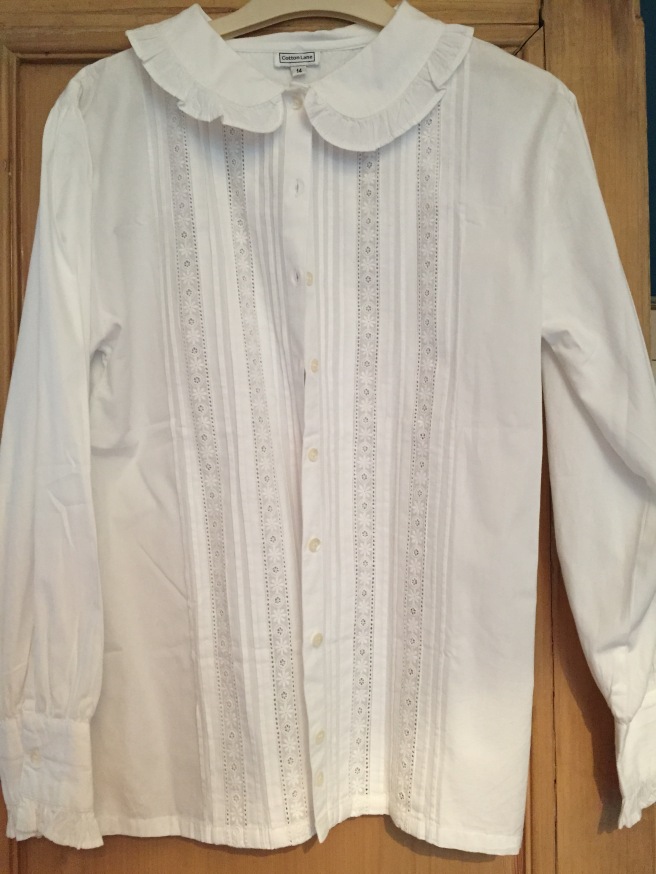 It’s by a company called Cotton Lane, who made the original blouses for ‘Nightingale’ nurses and have a good line of vintage inspired clothes in natural fibres.  It’s plain white, but sufficiently Edwardian looking to fit with the look.  The main problem with it is the ruffle on the collar.  But that was very easy to trim off with a pair of small scissors.

Missy’s blouse is worn with a small black cameo brooch at the throat.  Again, eBay came to the rescue here.  I found a pretty good match to the original for 99p!

(and in this picture you can see the changes to the collar as well).

I knew that I really wanted to finish the look off with a version of Missy’s hat.  I had real difficulty tracking down a black straw hat base that I could adapt to make it.  I bought a black sinamay tilt hat base from Petersham‘s, but it turned out to be far too small and wasn’t giving me the look I wanted.

Cue some frantic searching on the Internet.  Most of the black straw hats I found were very wide brimmed sunhats, usually with a very deep crown, rather than the shallow one I was after.  I have a big head (I take a men’s XL in hats, believe it or not), so I really didn’t want something that would perch badly on the top of my head because it was too small.  I needed a hat that was deliberately designed to sit at an angle over one eye, and, that like the original, wouldn’t project beyond the sides of my head. 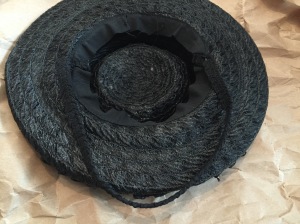 After much searching,  I eventually turned up this 1940s straw tilt hat on Etsy.  It has a slightly elasticated band designed to hold it on the back of the head, which makes it easy to get it in the right place and can be secured with a couple of kirby grips.  Which was great, because I was nervous about how I was going to keep it on. 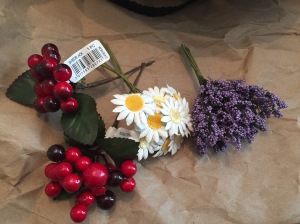 I modified it to look as much like Missy’s hat as possible by adding some plastic fruit and flowers (again, from Petersham’s).  There are two stems of black/red berries, one of fabric daisies and one of fabric lavender.  I trimmed the stems of these down and used millinery wire (but floristry wire would also do) to secure them in place on the brim of the hat, using the photo earlier in this post as a guide.  I found my jewellery pliers were incredibly helpful in pulling the wire through the straw of the hat.

Missy wears Edwardian style button boots under her skirt.  Much as I would love the excuse to buy new shoes,  I went for the ‘model’s own’ option.  I’ve had these boots for quite a few years now, so they’re definitely old favourites.  They’re by Irregular Choice.  The heel shape and profile of the lower part of the boot works really well, and the massive sparkly bows aren’t visible under the long skirts.

One thought on “Missy Cosplay: Part the Eighth (Finishing Touches)”