Over the break between Christmas and New Year I went to several exhibitions.  One of them – Celts – I’ve already blogged about, but I had a fabulous day out taking in three more with a female friend of mine.  The first one of the day was the Cosmonauts exhibition at the Science Museum, which I bought tickets for on the recommendation of another female friend.

I’d love it if in blogging about my visit to the exhibition, the key thing I’d want to write about would be the fascinating insights into the early days of space exploration.  How so much of the Russian space programme hinged on the collaboration between two visionary men: the thinker Konstantin Tsiolkovsky, whose thought experiments about what it would be like to be in space helped to shape so much of our current reality of space travel; and Sergei Korolev, the director of the Russian space programme who turned that vision into a reality.  About the ground-breaking design it engendered (I really want one of those Sputnik-inspired samovars).  About the terrifyingly brave men and women who took those first steps into space.  (And who knew that one of the main qualifying criteria for the programme was to be small enough to fit in the capsule?)  About the Cold War battle for space and the subsequent international co-operation that has led to the International Space Station and all the scientific developments it has engendered.

But, no.  The main impression I was left with after this exhibition is that the Science Museum doesn’t think science is for women.

I loved the exhibition so much that I wanted to take home some souvenirs.  Particularly one of the range of awesome tshirts that were for sale, given that I love wearing geeky tshirts.  I wear them round the house with jeans.  I wear them with skirts and funky tights when I’m out and about.  Perhaps I should buy one featuring the first woman in space, Valentina Tereshkova.  Or one inspired by those glorious Russian propaganda posters, with their instantly recognisable design aesthetic.  But it turns out that the Science Museum only offered one tshirt in a woman’s fit – a rather dull design based on a spacewalk motif.  When I asked the assistant on duty if there were any woman’s fit tshirts available he seemed surprised I’d even asked. 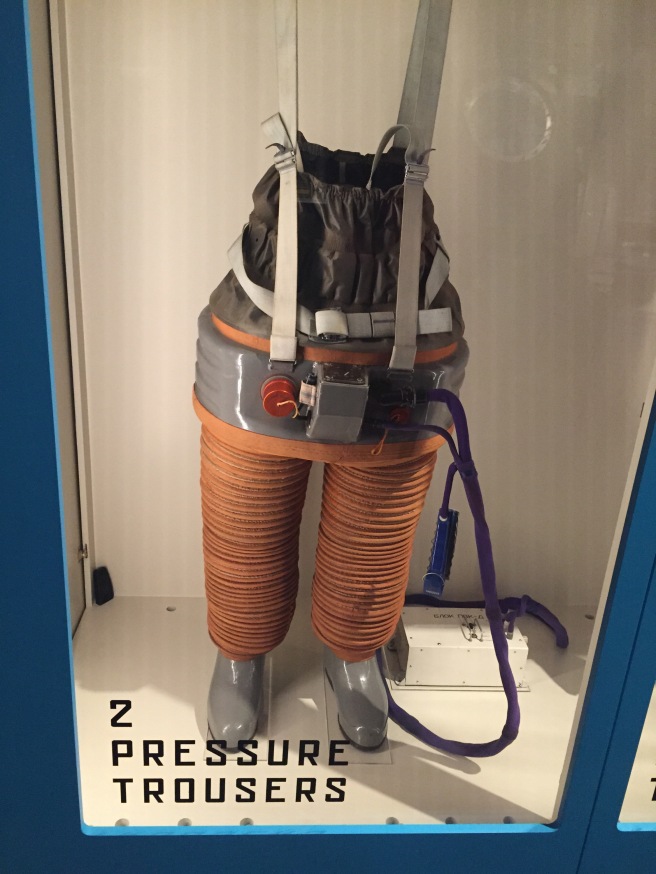 I checked the Science Museum’s website, and of the 23 tshirt designs they offer for sale, only one is available in a woman’s fit.  (Compare that to the Tate, who offer 10 out of their entire range of 38 tshirts, including children’s sizes, in a woman’s fit).  So I contacted the Science Museum to ask them if they had any plans to expand their range.  Disappointingly, I was told that not only do they have no plans to expand their offer, they’re actually intending to decrease it, phasing out the one design they currently offer in a woman’s fit.

A large proportion of the products in the Cosmonauts shop have been targeted at either unisex or female customers. These ranges include an exclusively commissioned range by the designer Keely Hunter and a number of items aimed at a contemporary adult audience. The Science Museum stocks unisex t-shirts (as opposed to men’s or women’s fit t-shirts) to ensure that our products are gender neutral where possible. We offer these in sizes XS to XL to cater to the needs of most visitors. The Spacewalk women’s fit t-shirt that you described is part of an old product range, and the move away from this style to a unisex fit was based on audience research, aiming to target the needs to our wide variety of visitors.

A quick straw poll of my female friends reveals that while some are happy to wear a unisex tshirt, most aren’t.  We should be careful not to generalise, but women’s bodies are, in general, a different shape to those of men.  We have breasts and hips.  We tend to wear skirts and jeans with a lower waist that sits just above the hips, and well below the natural waist.  Clothes are normally much more fitted, though fashions can vary.  A so-called unisex tshirt is designed for a typical male shape: straight up and down and with a loose fit.  Some women may choose to wear that style, but I’ve generally found them to be in the minority.  Personally, I don’t wear unisex tshirts because I don’t think they are flattering on me.  Buying a smaller size in the hope of getting something more fitted doesn’t work, because unisex tshirts lack the stretch that comes from the more fitted women’s styles.  So I’d love to know where and how the Science Museum did their audience research if it concluded that reducing people’s choice was a good idea.

I get that commercial imperatives may make it uneconomic to stock a range of tshirts in multiple sizes in both unisex and fitted styles (though that doesn’t seem to be a problem affecting the Tate).  But if that’s the case, please admit it’s that, rather than blaming it on audience research or pointing to the availability of overpriced fluffy hats as some kind of substitute.

The message I and others can’t help but take from this is that the Science Museum doesn’t think it’s important to cater for women in their merchandise.  It’s particularly disappointing given the important role the Science Museum plays in educating people about science and technology, and the huge range of evidence about the difficulties of attracting women to careers in STEM fields, much of which is down to the perception that science is for men.  You would expect the self-styled National Museum of Science and Industry to be at the forefront of breaking down those barriers, not reinforcing them.

One thought on “Gendered merchandising: A rant”