Onto the skirt (it’s a bumper blog update today!). 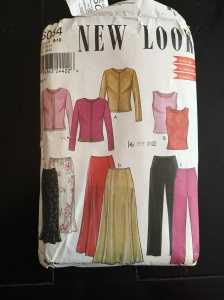 You’ll remember I was planning to use this pattern to make the skirt, using View D.

I found out after opening the pattern that the skirt has four panels, which means that the zip would have been offset slightly on the seam between one of the centre and side panels.  So I decided to alter it to use six panels rather than four.

It’s a bit fuller than I was planning, because of the extra panels, but I don’t think that’s necessarily a bad thing.

I ended up machining the hem, rather than doing my usual invisible hand-sewn hem.  That was just for speed, but I don’t think it will show.

I also machined in my first zip.  Achievement unlocked!  I had to use the special zipper foot for my machine and everything.  It’s just a basic zip in a grown on waistband.  But it works, which is quite exciting.

The original costume shows Missy wearing a petticoat under her skirt. I found this bridal petticoat on Amazon for a bargain price.  It was quite tricky to track down a straight petticoat, rather than a more A-line one.  It gives a good, Edwardian shape to the skirt.

One thought on “Missy Cosplay: Part the Seventh (The Skirt)”